Solving the Mystery of Solar Flares

Every 11 years the Sun goes through a period of intense solar activity when its north and south magnetic poles switch places. During this time of high solar activity, enormous amounts of energy are released in the form of solar eruptions that can interfere with satellites and GPS, affect radio communications, and, more positively, result in magnificent displays of Northern Lights in the sky. In fact, we’re going through one of these active periods right now. No one knows exactly why the Sun does this, and it’s a mystery that scientists like Dr Laura Hayes at the European Space Agency (ESA) would like to unravel.

Laura is a Research Fellow at ESA, and says one of the great benefits of having an ESA fellowship is that you “write a proposal and have full ownership of the project, which really gives you an excellent opportunity to grow as a scientist.” She’s working on the Solar Orbiter mission, a spacecraft specially designed to withstand extreme temperatures that’s flying around the Sun as you read this. Solar Orbiter was launched in February 2020 and has 10 instruments on board which send data and images back to Earth. It’s taking images of the atmosphere of the Sun and probing the solar wind, which consists of electrically charged gas (called plasma), and the heliosphere near the Sun. The solar wind fills the heliosphere, a kind of magnetic bubble enveloping our solar system, which is caused by the Sun’s magnetic field. Laura explains, “Solar Orbiter is actually going in an orbit very close to the Sun, within the orbit of Mercury, so we’re getting the closest images of the Sun ever to date.” In March this year, Solar Orbiter made its closest pass yet, coming within 48 million kilometres of the Sun (the Earth is 150 million kilometres away), venturing into uncharted territory.

Laura is particularly interested in data from Solar Orbiter related to solar flares – massive explosions in the Sun’s atmosphere. She says, “When you have these solar flares, they’re often accompanied by an ejection of plasma and magnetic field away from the Sun, known as a solar eruption. When a solar flare occurs, a big burst of radiation is emitted from the Sun across the entire electromagnetic spectrum, from radio waves all the way up to X-rays. This happens over 10 minutes to an hour or so.” As an observational solar physicist, she uses data from both ground- and space-based observatories across multiple wavelengths to understand the physics of what’s happening in these solar flares. A Solar Orbiter instrument called STIX gives her data on X-rays which are emitted during solar flares. Laura’s particularly interested in timing analysis, looking for oscillations and timing signatures in the flare sites as these give information about the type of energy release that’s occurred. 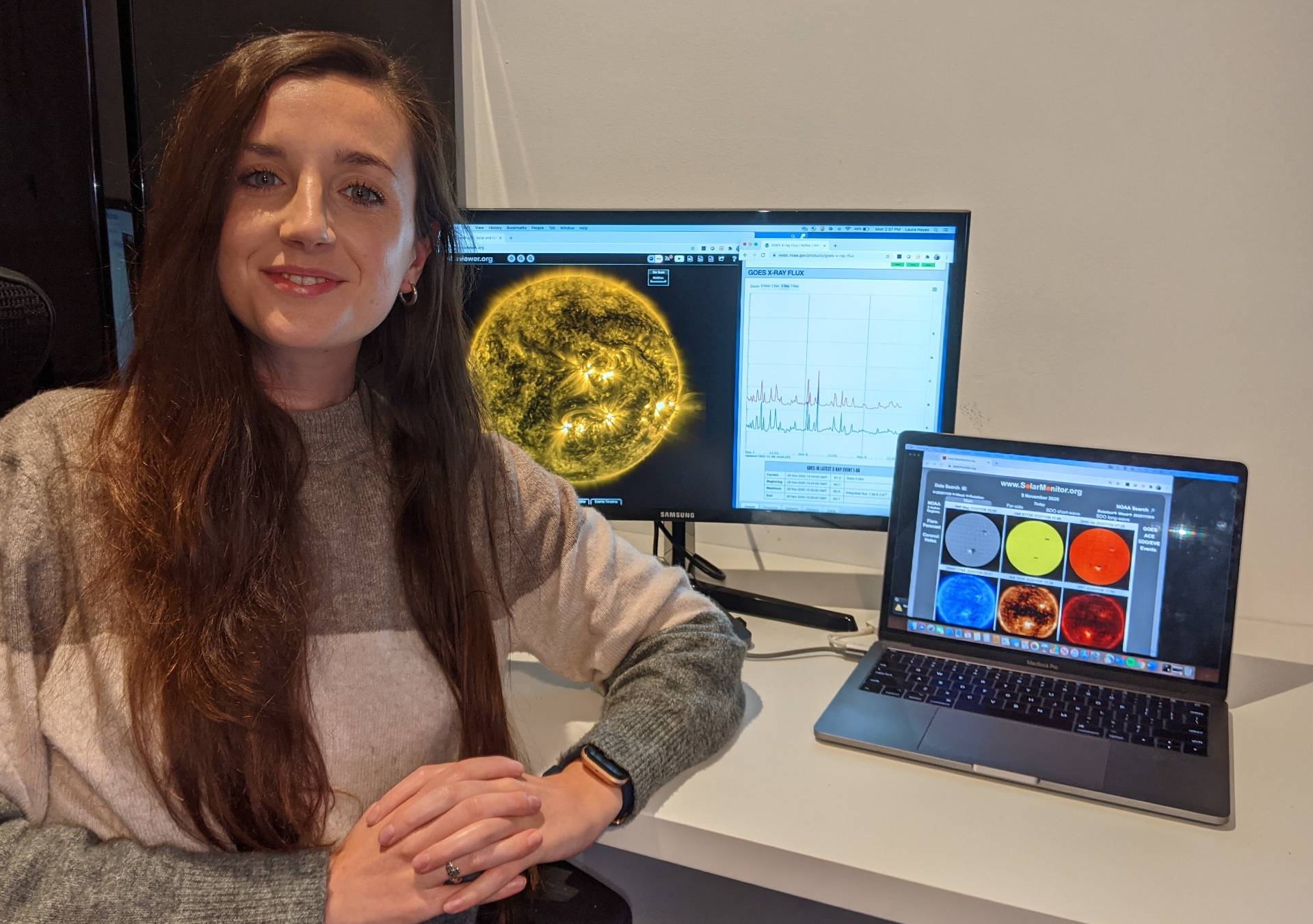 This summer, Laura and another research fellow are planning to extend this research to stellar flares from stars other than the Sun and take on an intern to work on the project. She’s appreciative that she can attend mentor training sessions in preparation for her new supervisory role. This project arose because ESA places a strong emphasis on networking and fostering interdisciplinary collaborations, not only internally, but also externally with colleagues around the world. She feels that there’s a lot more interdisciplinary communication at ESA compared with other places she’s worked. She says “I work with people who study Mars or focus on extragalactic things, and I’m in seminars with those colleagues. ESA really makes an effort to create a network for all the research fellows.”

Another thing Laura values is that there’s a real emphasis on career development and developing new skills at ESA. As part of this, fellows can choose to spend up to 20 percent of their time away from their research on other ESA science-related activities like getting involved in planning and operations of projects, citizen science, communications, or testing data archives. ESA is keen for external scientists to explore their data and has a policy of making all of its research and patents available to European citizens.

Laura joined ESA at the end of last year and has only positive things to say about working there. “It’s an exciting place to be. Everyone is very nice, and it’s great being in such an international environment. A good work-life balance is really encouraged, which I think is so important in academia. And I like the way you can get involved if you want to learn more about something that’s not really in your research area. You can also help out with organising seminars and have a hands-on role in staff associations and things like that, so you really do feel part of the ESA community as a fellow.”

ESA has been a place of integration for Europe and its people, and has been strengthened by the wealth and diversity of the cultures they represent.

ESA has been a place of integration for Europe and its people, and has been strengthened by the wealth and diversity of the cultures they represent.

Dr. Laura Hayes is a Research Fellow at the European Space Agency (ESA). Her project will take advantage of the new and unique observations from ESA’s Solar Orbiter. Laura will use these to make new discoveries about the true nature and underpinning physical mechanisms of time-dependent signatures in solar flare emission.