In a society where the amount of information is growing explosively, free access to reliable and integral data is crucial. As the national statistical office, Statistics Netherlands (CBS) provides reliable statistical information and data to produce insight into social issues, thus supporting the public debate, policy development and decision-making while contributing to prosperity, well-being and democracy.

CBS was established in 1899 in response to the need for independent and reliable information that advances the understanding of social issues. This is still the main role of CBS. Through time, CBS has grown into an innovative knowledge institution, with continuous adoption of new technologies and developments in order to safeguard the quality of its data and its independent position.

We register and research almost everything 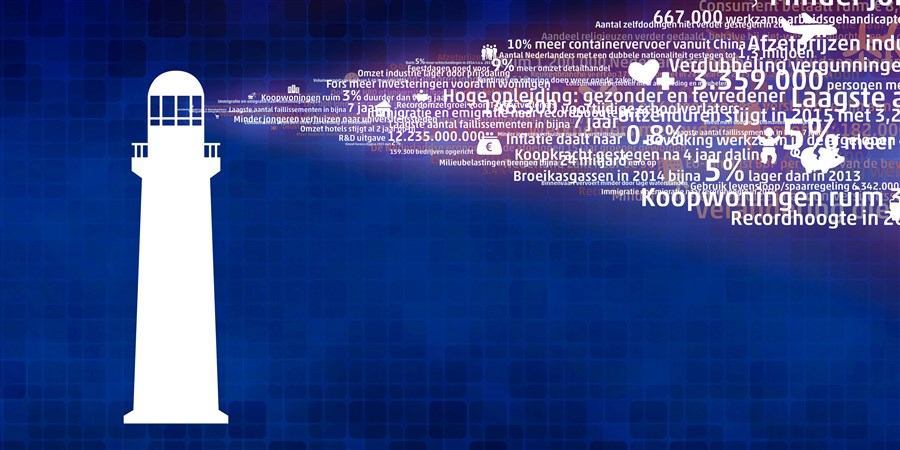 CBS collects information and conducts research on almost everything that is relevant to Dutch society, whether it is about childcare or employment, school leavers or potato harvest. Based on our figures, public authorities formulate their policies, companies determine their strategies and journalists write their stories. Our work is featured in the news on the Internet, radio, on TV and in the papers almost every single day.

Did you know that on 1 January 2016, the Netherlands had 7.7 million households? This was 56 thousand more than one year previously. And did you know that between 2003 and 2016, the number of disability benefits dropped by 179 thousand? And that in 2016, Dutch power plants burnt 12 billion kg of coal and 7 billion cubic metres of natural gas, while altogether 382,500 new cars and nearly 2 million second-hand cars were sold?

Although our organisation is mainly financed by the Ministry of Economic Affairs, we do operate as a fully independent knowledge institute. Our public tasks have been laid down in the Statistics Netherlands Act, which also safeguards our independence.

The office environment at CBS is a pleasant mix of government and business. You will find a very diverse group of employees who range widely in age, nationality, discipline and career. Our organisation is characterised by collegiality, a pleasant working atmosphere and room for ideas. One thing all our employees find important is the quality of our research results.

CBS has offices in The Hague, Heerlen and on Bonaire. They cooperate closely with each other, for example through regular visits and via video conferencing. It may also happen that a colleague is transferred from one office to the other.